Marking out the hours 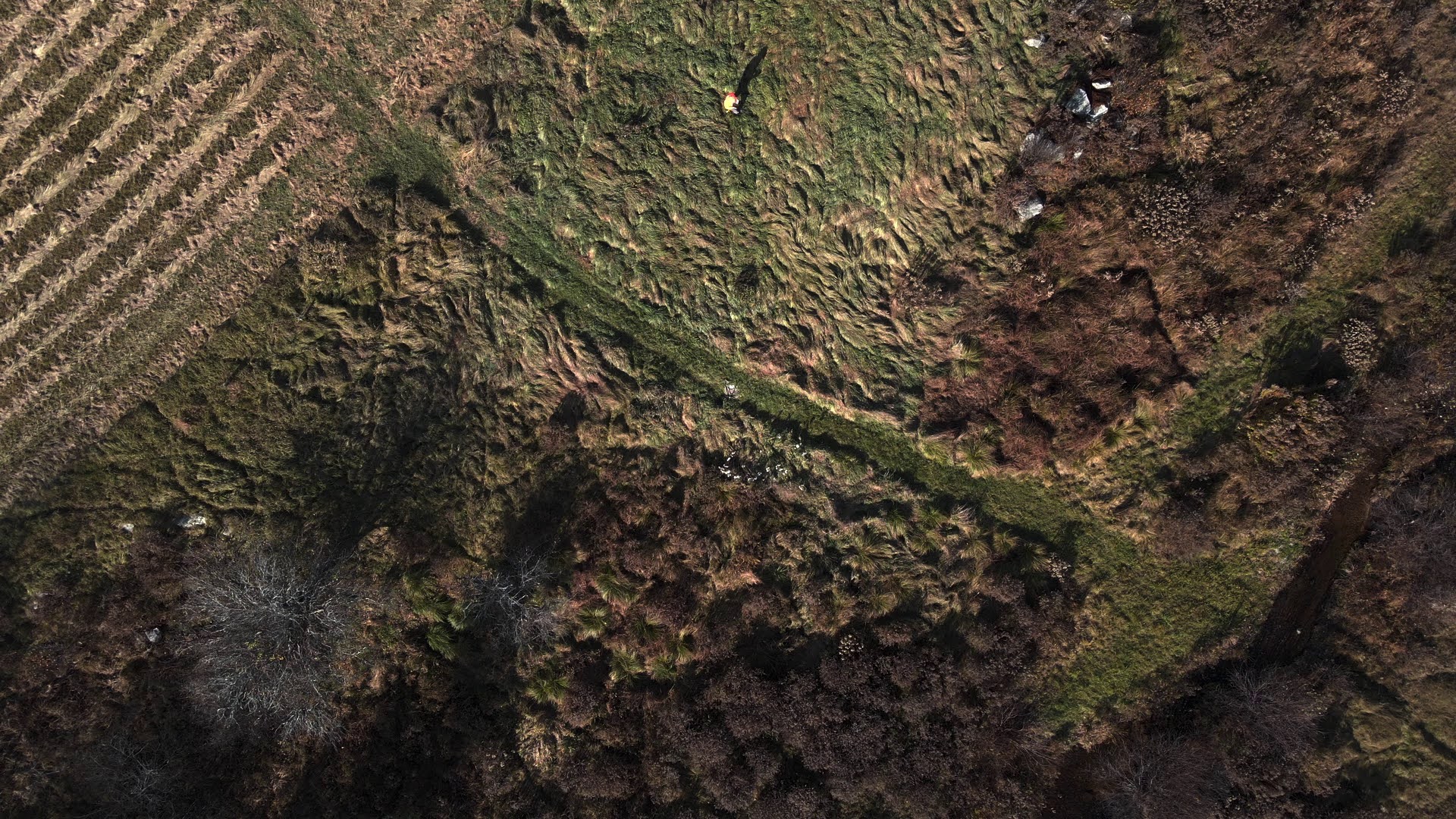 In each video, a camera hovers directly overhead as a person walks in a complete circle over the course of exactly one hour. The person starts at the top of the screen and moves as consistently as possible, so that his position on screen can be read as the minute hand of a clock.

This video-performance series draws on the tradition of labyrinth-walking, a meditative practice entangling perceptions of time, space, and copresence. The path of a labyrinth is designed to bring the walker at intervals closer to the center and away again, near other meditators and away agin, each in his own hermetic orbit of thought. Here, the circular path invites the viewer to experience the piece ambiently, allowing it to exist in the room without requiring strict focus - you and I come in glancing contact with each other throughout the hour, following the dynamics of the attention in the room rather than a path on the ground. I use ambient videos like this as a way to yield, in their viewing, the same layered depths that are involved in the pacing-out and filming of the piece.

Beating the bounds is a perennial rite in which a community transits the circumference of a village, their performance reinforcing a collective consensus on the boundaries and borders of their domain.

Here I am beating-out the clock, dedicating 1:1 attention to remarking/marking out time itself. The bounds are temporal and explicitly not physical; you can’t see the face of the clock in the shot, it is only traced out as I walk it. I try to walk an exact circle, despite that circle being visibly interrupted by other things; streams, paths, etc; as well as to have the performance interrupted by nonparticipant actors (deer, frolf teams, vehicles, birds, leaves, etc). “Super position” of the clock and the timekeeping metric (rigidly measured face; highly technical filming equipment and process) onto various wilds in a manner similar to my larking piece.

A profound sociotechnical moment allows me my bird’s eye view here, a perspective long imagined in historical artworks (Nazca lines, Cerna Abbas Giant) but only now found ready-at-hand. The camera in this piece is ordered to be dead still, but its small motions (to account for wind, magnetic inaccuracies, etc) highlight the work taking place to serve up such a serene view - like a duck’s placid top-half gliding through the water while its unseen feet flail wildly below the surface. Similarly an absent orchestra of finely-tuned control loops and hyperprecise satellite constellations work to provide an imperturbable, centered, eternal view-from-heaven.

Each video’s subtitle is taken from the phenomenon that interrupted the piece - the one in the video below is “Zorro,” the name of the dog you can see confusedly trying to play with me while I’m walking the circle. Other titles are “Thorn”, “Frolf”, and “Deer”.

Prior to each performance, I measure out the circle using some standard surveying equipment; I mark out a 74-foot diameter circle and at each of the 12 arcs (one for each hour’s position on the clock) I place a small flag not visible to the camera. Once the camera is running, I use a timer to ensure I walk each section of the circle in the same amount of time.