Performance of the piece in the Beech River.

I completed the first performance and documentation of this piece in rural New Hampshire in November 2019. The pandemic hit just as I was preparing to show it in person. *The ideal* presentation is a synchronized 2-screen video loop with the text (below) available to read somewhere in the room. *The reality* is that I can’t let this sit anymore, and would like to share it, so I am placing it here. Please understand how non-ideal it is to see gorgeous synchronized 2-channel video smooshed into one small Vimeo screen :-( If you have a space and would like to show this, or facilitate a re-staging (the performance can take place in any woodsy river), please get in touch. 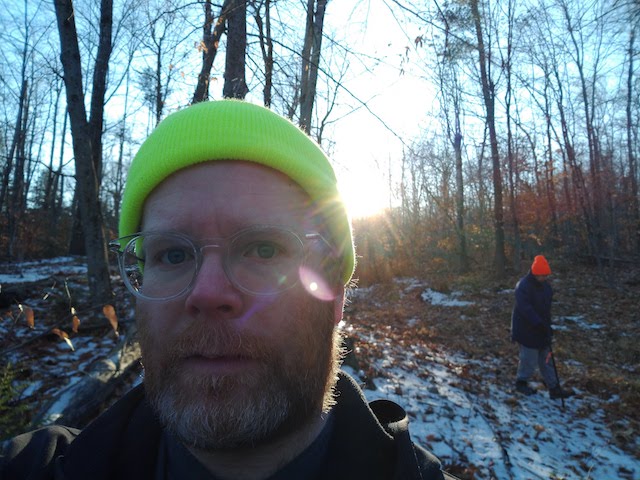 Ma and I walk in her woods, mostly in silence. We move among beech trees and older conifers, following low ground and favoring the easy route. Each of us hopes not to have to carry the other. The land is ordinary (objectively! To me: ancestral, enchanted), and she had a forestry service come do some logging a few years ago. The intervention was a weirding of the space: more often than before, we find ourselves wondering where, exactly, we may be in reference to the three main trails that used to divide the land. Now, with pragmatic caterpillar tracks opening new areas to our walks, it’s not uncommon for her to stop at a spot, troubled, her face darkening. She’ll say, or not have to say, what’s on her mind: what a mess.

These spindly young trees, this overgrowth: a shambles.

She’ll begin to tidy up, parallelizing branch-bunches and laying them to the side of what we think might be the trail. After a while, something breaks the reverie (errant dogs, waning light, shadow of Sisyphus) and she’ll move on.

It’s like we’ve sullied the woods—hired a chaos-agent to disrupt a natural order, moving branches and paths where they shouldn’t be. The tidying isn’t atonement, just scratching an itch: the surface of a weave has been stretched out of shape, and massaging the warp and weft back into order feels essentially productive, useful.

We commissioned a competing model of entropy for this “wild” space and, years on, meander uneasily through the results.

A woman wades through the center of a shallow, calm river. The GoPro on her forehead shows that she is mainly looking straight down, and often hunches over to get closer to the riverbed; she carefully frames her shots, and her searches, so that the sun’s glare never reflects off the water-surface into her eyes—if it did, she wouldn’t be able to mudlark very well.

She reaches down and picks up something that is, to the viewer, indistinguishable from the other multicolored rocks on the riverbed. Only as she raises it up out of the water do you notice its flat, straight edges—it’s a fragment of white china.

There’s a pattern on the china. We’ll look it up later using reverse image search or, more likely, by crowdsourcing an answer from other mudlarkers online. She keeps the fragment in her bag, even if it’s not a “keeper” for her—a side benefit of mudlarking is the gradual cleanup of the riverbed. In some places, there’s nothing left to find—the spot along the river had a bottle dump, or bordered a pottery, and had yielded finds so interesting that after a while, it was cleaned out. Subsequent mudlarkers, also YouTubing their travails, will dejectedly detect this—that all the fun has been had; it’s just a boring river again, waiting for renewal via trash and time.

“It’s a 79, so it can’t be another soda can” he says, digging with a tactical trowel into the green turf of an open field in rural England. After some depth, he begins poking a sealed plastic wand into each clod: one clod elicits a chirp, and the hands quickly break it up into smaller sub-clods, eventually yielding a large copper coin with Young Victoria (1838-1887) on obverse. A penny from the past, but too worn to be valuable; it is tossed into the finds pocket with other insubstantial metal objects: pull-tabs, wads of takeout-food foil, nuts and bolts.

The metal detector is a transducer, exciting electromagnetic fields into sound, sound into digging, and holes into treasure. You find garbage, or loot.

The space is exhausted and the game is over when no further electromagnetically-responsive material remains to be found. On popular sites—battlegrounds, ghost towns—this is a common, if lamentable occurrence: the site is played out, it has yielded its treasure. Future entities scanning the surface of the world will notice swaths, broad and organized tracts, of land bereft of ferrous material. Statistically, this must indicate an intervention—no natural process can denude such geometric patterns of a specific resource.

Strategies, formal and casual, for distributing order over a wild domain⎮measure. A pastime made of the haphazard sorting, sifting, organizing of space: is this real life, a rage to order?

Looking for the grace in this situation, the magnanimous elision—the happy-go-lucky—yields a site of poignant depth and breadth. These practices produce sites of exquisite entanglement: wilded and ordered, semantically winnowed through a hi-Q spectral filter.

A moment of kinship, of transtemporal community—to detect this process, this pursuit—to see the land as already-demarcated and, in so seeing, feeling containment, support, validation, envelopment: there is no wild, there are only unexamined spectra. There is no new, there is only a change in framing. 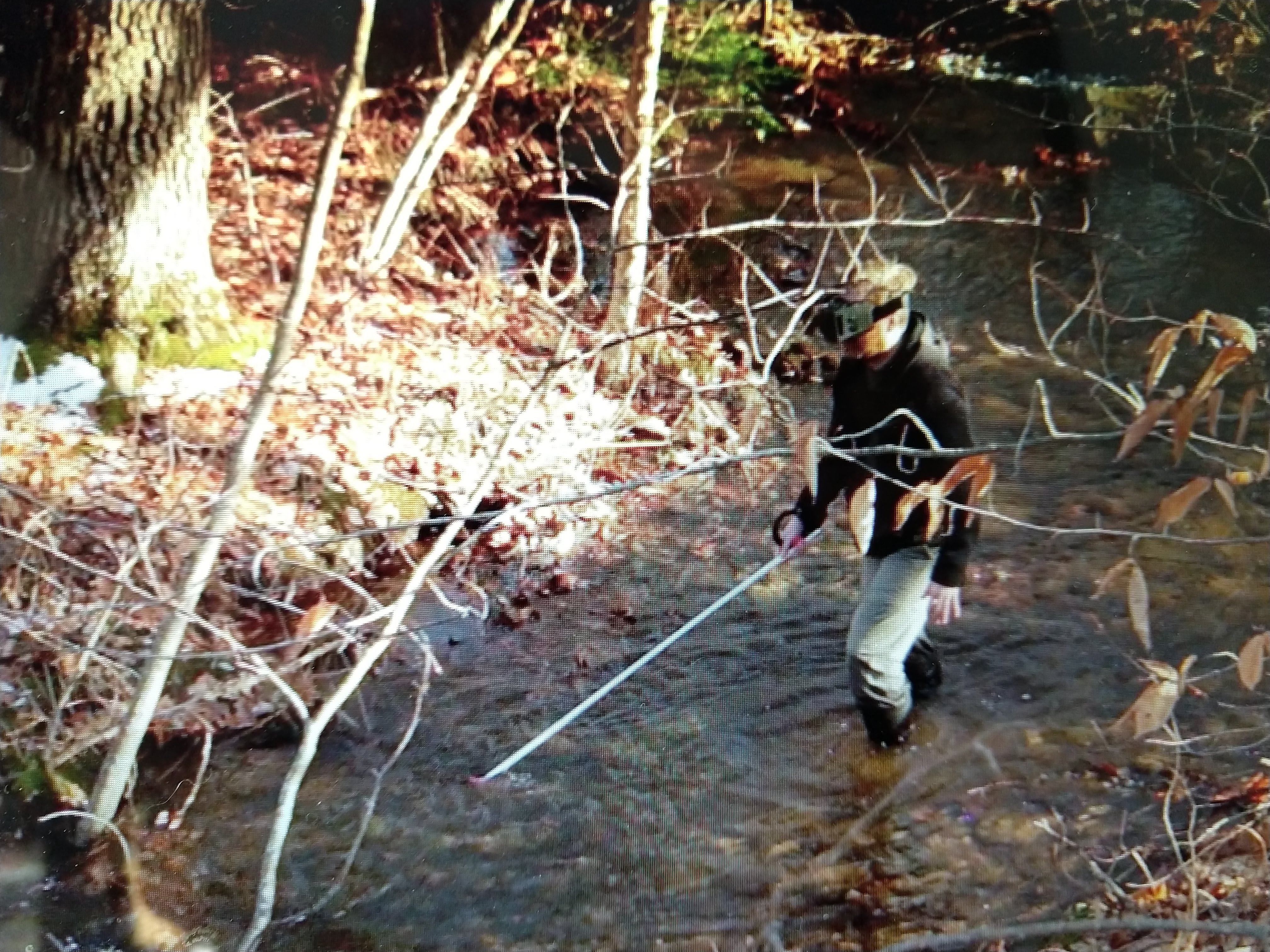 Here is something: a wand-and-system I made from aluminum rod and cheap electronics plus gaffer tape, a wand that resembles a metal detector. Instead of a coil, though, the wand has at its end a borescope—a small videocamera with macroscopic lens. And at the actuator-end, a commodity “virtual reality” headset for viewing the live feed. I use this wand to wade through riverbeds in a new way, seeing differently—organizing my motion through an absurd, gloriously difficult microscopic perspective. Everything is waterproof, and I fall down a lot.

The wand is another transducer, filtering, focusing, and amplifying a radical sensorium directly in front of me—for all the good it does, it might as well be a much greater distance farther away: as I move forward I must try to keep the last minute’s muscle-and-vision input in my working memory, to interpolate between the live/remote feed and the river-rocks underfoot.

I walk midstream in order to avoid disturbing the rocks with footprints; what stones I do upend are quickly settled by the river-current.

The video-feed is not designed to be recorded (although I have cheated here, once or twice, for you). It is a live (limited, vital, restrained) link between the borescope’s lens and my vision. It is a performance whose traces are designed to be minimally-disturbing to the entropy of the site; the cameras at work to record the performance are the only off-river footprints that remain.

I used to think I could tell where my mom had recently been walking by spotting neat little piles of sticks—pockets of order in a distressingly messy forest.

It’s still possible, because our family are creatures of habit, to find places on her small acreage that we have never before visited. It takes some determination, or more likely some true cluelessness, or the pursuit of a dog in pursuit of a chipmunk, but it remains possible. When I find these spaces, I look for piles of sticks on the ground. I do not know what I would do if I found them.

When I wander through the borescope-spaces, a procedural satirist on a goofy mission from no command, I fantasize about happening across an improbable order: a series of pratfalls in a sequence matching mine; a sequence of divots mirroring my wand’s swath.

The performance focuses this entanglement between order and wilderness, between pursuit and ritual—I tighten this knot.